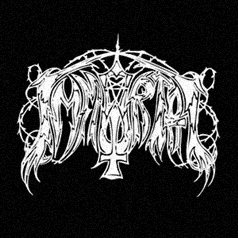 Immortal rose from the ashes of an earlier Death Metal band, known as Amputation, back in 1990. For one reason or another, it was decided to start fresh despite having lost only one rather unimportant member. What some may not be aware of is that Immortal started out by continuing on the same musical path, playing their own form of Death Metal. It was sometime after this that Euronymous got Abbath into Black Metal, thus altering the course of Immortal's career (and quite likely saving them from becoming yet another forgotten band, among countless others that were playing the same style). Though they had just released their first demo in July, by October 1991 Immortal unleashed their first E.P. upon the world. This would mark the first Norwegian Black Metal release since Mayhem's Deathcrush, in 1987.

This E.P. only contains two songs, plus an intro. In this case, the intro is short enough and does a good job in establishing a dark and ominous tone. "Unholy Forces of Evil" is an interesting song, as it officially introduced the underground to the band's new sound. Abbath's vocals have changed from the very deep and guttural sound that was heard in Amputation, and on the first Immortal demo, to something much more raspy. His voice was very close to the way it would sound on Diabolical Fullmoon Mysticism, but not completely. Much like Darkthrone would do, Immortal chose to recycle some of their Death Metal riffs, rather than taking the time to create entirely new songs. Perhaps, they were in a hurry to record something that reflected their change in outlook. "Unholy Forces of Evil" includes re-worked riffs from the earlier demo, most likely from the song "Suffocate the Masses" (though it is difficult to tell, since all of those tracks are so similar). For one reason or another, the atmosphere does not manage to match that of the later version. "The Cold Winds of Funeral Frost" has a bit more of an old school feeling, thanks in part to the percussion and the overall vibe of the songwriting. Like the previous song, it moves along at a rather relaxed pace, with some hints of a Bathory influence. Also, like the first track, it builds up to a more intense speed with blasting drums, near the end.

The production is not so much raw as it is kind of muddy. The guitar tone lacks the cold feel of Diabolical Fullmoon Mysticism. As a result, the guitar riffs are not as sharp and tend to blend in with the rest of the instruments. In particular, the bass is too high in the mix and, combined with the lack of sharpness in the guitar tone, gives the music more of a warm feeling. As for the vocals, they also seem to blend in to the rest, to an extent. It could be due to the levels, just as much as the fact that Abbath's voice doesn't have the exact same edge to it that he would later develop. Little things like this, along with the more subtle nuances in execution on the full-length, make a big difference in the type of atmosphere that is present.

Immortal is definitely an interesting E.P. and is recommended for hardcore Immortal fans, though it is hardly essential for anyone else. Other than the intro, superior versions of these songs can be found on the band's debut full-length, so there is no real reason to go to any trouble in seeking this out. As a matter of fact, within the context of Diabolical Fullmoon Mysticism, these aren't even the strongest songs on the record. This is the sort of record that was far more important when it was new, though losing its significance once they released their first L.P.
Posted by Noctir at 8:36 PM