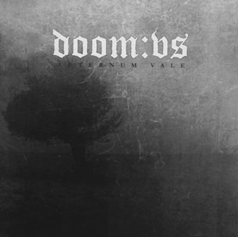 Doom:VS is a side project of Draconian's Johan Ericson. While that band possesses far too many gothic elements for me to tolerate, his solo work is very solid Doom/Death with obvious influences from the older works of Paradise Lost, My Dying Bride and Katatonia, but with a definite character of its own. This band was recommended to me by a friend, some years ago, but I took quite a while to get around to really listening to it, assuming most modern things to not be worth the time to listen to. That may be the case with Black, Death and Thrash, but it would seem that the various forms of Doom Metal are still growing stronger. Once I really gave this some attention, it did not leave my ears for many months and is still something that I find myself returning to when in certain moods.

Aeternum Vale, latin for 'Farewell Forever', was released in July 2006. From the initial moments of "The Light That Would Fade", one can tell that this is far darker and more serious than anything released by Draconian. The guitars are crushingly heavy, possessing somewhat of an oppressive feeling, which matches the overall atmosphere of misery and hopelessness. Unlike a lot of Funeral Doom bands, things never get too slow to where it feels as if nothing is happening. Obviously, the entire album is a rather slow-paced affair, yet there is enough diversity in the songwriting that each song really stands out on its own and you never find yourself getting bored. The guitar melodies are well thought-out and perfectly convey a feeling of utter despair. Johan utilizes harsh vocals for the most part, in a deep style but not to the point where it no longer has any meaning. Some vocalists employ such a guttural approach that it renders the vocals completely ineffective, but that is not the case here. There are bits of clean vocals, occasionally, but mostly in a backing capacity. The drumming is used sparingly enough, never going overboard and distracting from the riffs. Everything really comes together to serve the singular purpose of opening the gates to the darkness of hell that lingers within us all. As the album progresses, you can feel yourself being dragged deeper into the abyss.

The lyrics, themselves, do not merely tell the tale of one man's sorrow. One really gets the sense that the message is that this empty world holds nothing but grief and misfortune for all of us. Still, despite the fact that we are all here in this miserable wasteland of nothingness, we must carry our own load and thus we suffer together and in solitude at the same time. This is emphasized by the woeful lead in "The Faded Earth", which almost digs into your chest and carves away at the hole where your heart once resided. These days, it seems as if a lot of bands have forgotten the usefulness of guitar solos and the fact that they can really add a lot of depth to what is going on, when used correctly. Perhaps, there is still some rejection of the typical, obligatory guitar solo that one would often hear in the '80s and even into the '90s, but many musicians do themselves and their music a disservice to neglect this. There is very minimal use of keyboards, as well as some spoken word parts, but these things are done tastefully. Occasionally, there are sections that use clean guitars, also. These quiet parts are not terribly common, but used enough to add yet another dynamic to the album. To further this, there is also some limited use of tremolo melodies to accentuate the typical Doom riffing.

The highlight of the album is "Oblivion Upon Us", starting with a sombre piano bit and then erupting into an abysmal dirge of utter melancholy. It features some quieter parts that have clean spoken vocals, adding to the dismal atmosphere. The faint hints of keyboard use really demonstrates that less is more. There is somewhat of a nightmarish feeling to this song, at times, then bleeding into sections that are more sorrowful and epic. This very memorable and somewhat melodic piece of music captures the feeling of misery and despair that awaits us all, those who continue to live in this empty and soulless world. Life is a big nothing. Any attempt to create meaning will only end in wasted effort and broken hopes.

"I see no end to all this pain... the world is dead through my eyes"

For the most part, Aeternum Vale is structured well. The song placement works and the tracks themselves are all at just the right length in the sense that they have time to take you on a journey into misery, yet they aren't too long to the extent where you disconnect from what is going on and become bored. "The Crawling Insects" may be the one exception, in that it seems a little weaker than the rest. The only song that goes past the ten-minute mark is "Aeternus". This is a good thing, compared to bands that offer up half a dozen songs that range from ten to twenty minutes. The running time of this album is just under fifty minutes, which is a solid dose of Doom without becoming tedious to listen to. The overall sound is really good, as well. Of course, Death/Doom is not supposed to sound all that raw or necro (with some exceptions), so the standards of production are completely different from the likes of Black Metal. Everything here is rather clear and this works well with the mournful guitar riffs, giving them the full ability to draw you in and crush your spirit. For fans of the older works of Paradise Lost or My Dying Bride, this is highly recommended and does well to build on that style.
Posted by Noctir at 2:51 PM