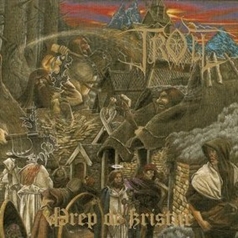 After '93/'94, the Norwegian Black Metal scene became flooded with imitators that had absolutely no understanding of what they were doing. They sought to join in on something that was gaining notoriety and yet had nothing original to add. It was practically impossible, as they had no real background in this music, nor any clue as to the darkness that inspired its very creation in the first place. Bands like Darkthrone and Burzum were not only influenced by the '80s bands, but they reached back and connected with the primeval darkness that had spawned this gloomy music in the first place. Unfortunately, those that followed looked no further than their immediate peers and could only mimic what they heard, lacking any deeper meaning. Such is the case with the band Troll and the debut album, Drep De Kristne, released in February 1996.

By this point, simply hailing from Norway was reason enough for a band to be signed and to have the opportunity to release an album. It is amazing how easy to please people can be, sometimes. Perhaps, the masses have lower expectations, but it is difficult to imagine that anyone could be fooled into thinking that this piece of trash has any musical value, whatsoever. In doing a little research, many appear to have the opinion that this album is good just because it is better than those that follow, or that it is more 'pure' than what Nagash later did in his musical career. The harsh reality is that Troll is a worthless band and was only ever signed to a label due to being Norwegian.

The music on Drep De Kristne is painfully generic, at best. Nagash listened to quite a lot of Emperor, it would seem. The guitar riffs are boring and a dime-a-dozen. That hardly matters since the guitars are overpowered by the wretched synth. Troll really relies on the symphonic element to carry the music, and it shows in the songwriting. The guitar melodies are haphazardly constructed and do not present a single idea that had not already been explored by the likes of Darkthrone, Emperor and Gorgoroth, to name a few. Even worse than the below-average compositions is the fact that there is nothing dark about this. It is inconceivable that a band would proclaim to be part of the Black Metal movement while failing to create a dark or evil atmosphere for even a single moment. This was, obviously, lost on this child as he was only concerned with trying to imitate the general style of his heroes while forgetting that the music should have some sort of substance. Even when you think that Troll may have, accidentally, slipped a decent song onto the album, things abruptly shift as if there was a conscious effort to avoid doing anything worthwhile. For example, "Med Vold Skal Takes Kristenliv" begins with some promise and actually has a little bit of intensity in the opening riff, before halting and turning into another boring throwaway track. Another example of the band's inconsistency is the song "Trollberg", which is totally ridiculous and tries to add some sort of folk feeling. If the weak songwriting had not already proven Nagash incapable of conjuring up an atmosphere of darkness, then this goofy song makes it absolutely clear.

Nothing good can be said of the production of this horrid record. The most dominant aspect of the sound is the synth. This absolutely drowns out everything else, to the point where one may wonder why Troll didn't drop the conventional instruments altogether and make a pure ambient album. It is always amusing to be able to see so well that someone had just gotten their first Casio and could not bring themselves to put it down long enough to focus on making real music. Even when you try hard to focus on what is happening underneath the keyboard nonsense, there is not much to appreciate, here. Nagash does a fairly decent job of imitating Ihsahn of Emperor and Hat of Gorgoroth, for whatever that is worth. The vocals are buried in the mix, far too much, and the drums are higher than they should be when compared to the guitars. The guitar tone does have a decent sound, to tell the truth, but this cannot combat the poor songwriting and shoddy production.

To put it in a few words, this album offers solid musicianship but terrible songwriting. Troll, like so many other bands, only gets a pass from some people for being Norwegian. Had Nagash come from any other country, he wouldn't have even been signed in the first place and, if he managed to make an album anyway, no one would have taken notice or cared in the slightest. Drep De Kristne is a recording that is 95% synth, 5% Metal and 0% Black. Eventually, people will learn that it takes more than harsh vocals and a few tremolo melodies to make something Black Metal. If you are the sort to blindly worship anything Norwegian, then you will probably eat this up. Same goes for listeners that like limp-wristed, non-threatening music that can serve as background noise for trying on mother's make-up. However, for those with even the most rudimentary sense of good taste and the slightest hint of critical thinking, this will prove to be nothing more than the generic pile of garbage that it is. This is not 'Black Metal Art', it's pretentious, sub-par filth that never should have been recorded. Avoid this.
Posted by Noctir at 2:32 AM