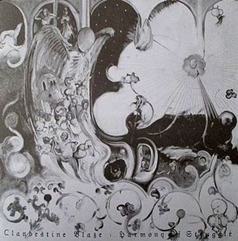 Clandestine Blaze is a rather obscure band from Finland. It seems that the last several albums are released almost in secret, as news spreads so slowly and not much is mentioned about them. Even on Mikko's own Northern Heritage website, the mention of his latest release is usually buried in with everything else, with no special attention given to it. So it is no surprise that, despite the album being released in May 2013, I am just now learning of the existence of Harmony of Struggle. Thankfully, fans of Clandestine Blaze were not subjected to another four-year waiting period, as before. Especially since the last two albums, Church of Atrocity and Falling Monuments, were mediocre when compared to the Mikko's earlier works. As such, expectations for this record were rather low. This was a good thing, as it led to somewhat of a pleasant surprise to find that this collection of songs seems a bit more inspired and coherent than the last couple of releases.

Past albums from Clandestine Blaze have been characterized by somewhat odd production jobs, yet Harmony of Struggle sounds much less awkward and possesses a better sound than its immediate predecessor, in particular. Whereas the last record was distorted in the wrong ways, enough to negatively affect the overall atmosphere, this effort is instantly more pleasing to the ears. The guitar tone is powerful and raw, with no excess irregularities in the sound. At times, it hearkens back to Night of the Unholy Flames and Fist of the Northern Destroyer, especially during the faster parts. The drums are at just the right level, rather than pounding on top of everything. The percussion is more blunt, rather than possessing the hollow and distracting sound that was present on some previous albums. The vocals sound nearly identical to most of the band's previous works. Mikko's voice has always been deeper than most standard Black Metal vocals, and buried just enough to allow the guitar melodies to be the primary focus but still high enough to be easily discernible.

Musically, this is definitely the strongest work to be released under the Clandestine Blaze name in nearly a decade. The songwriting is much more cohesive and the addition of eerie keyboards, from time to time, really accentuates the riffs and the overall feel of the tracks in a positive way. While Fallen Monuments was a step up from Church of Atrocity, in some aspects, the poor production was really detrimental and the whole thing was rather forgettable. However, Harmony of Struggle is makes much more of an impact from the very first moments of "Memento Mori". This morbid intro sets the tone for what is to come, somewhat reminiscent of Si Monumentum Requires, Circumspice from Deathspell Omega. This leads into the intense "White Corpse", which is a fast-paced track that belongs among the better Darkthrone-inspired pieces that Clandestine Blaze has produced. Mikko always excelled when he went for the more straightforward songs that featured tremolo riffs over fast and primitive drumming. "Messiah for the Dying World" and "Wings of the Archangel" also follow this pattern, though the former also includes a more Celtic Frost-derived mid-section and a slower ending. While certainly influenced by the sort of riffs present on Under A Funeral Moon and Transilvanian Hunger, he has always managed to add his own unique take that made his band stand out among the legions of clones. Slower songs, such as "Myth Turned Alive" and "Autumn of Blood and Steel" possess more power and add a bit more of a morbid feeling to things, with the latter being book-ended by two more instrumentals. While the influence of Fenriz and Nocturno Culto can still be heard, the Burzum influence that once made up a fairly strong part of the Clandestine Blaze sound has gradually faded.

Harmony of Struggle features some memorable songwriting and is quite a solid album. With that said, it still lacks the severely eerie and darkened feel of Deliverers of Faith. It would appear that, in retrospect, that record was an anomaly within the discography of Clandestine Blaze, as Mikko has never before or since produced something with such a nightmarish feeling. Perhaps, it is unfair to compare all subsequent works to that one. So, to ignoring that, it would be safe to say that this new record is the best thing he has done in the past ten years or so. It may be lacking something, similar to recent efforts from Horna and Sargeist, but this is a worthy listen and should please fans of Clandestine Blaze or Finnish Black Metal, in general.
Posted by Noctir at 10:08 AM