Carpathian Forest - Journey Through the Cold Moors of Svarttjern (1993) 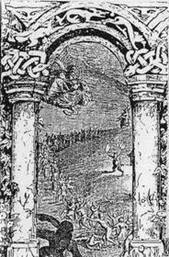 Journey Through the Cold Moors of Svarttjern is the second official demo from the now-infamous Norwegian band known as Carpathian Forest. Released in April 1993, this recording is quite different from Bloodlust and Perversion. This is one of the most unique releases in this band's discography, and also one of the best.

Unlike their previou outing, which was dominated by heavy riffs that owed a lot to early Mayhem and Celtic Frost, Journey Through the Cold Moors of Svarttjern is a much more atmospheric effort. Two of the three tracks would end up on Through Chasm, Caves and Titan Woods, without much alteration. The title track is a dreary and woeful tune that includes acoustic guitars and some of the most anguishes shrieks ever captured on tape. Of the three, this is the most complete and meaningful song on here. "The Eclipse / The Raven" is a morose piece that includes a couple verses from the famous poem by Edgar Allan Poe. The obscure vocals are backed up by sparse synth, sound effects, acoustic guitar and simplistic bass lines. Its relative brevity suits it well, as much more would have been excessive and monotonous. "The Last Sigh of Nostalgia" is quite similar in structure, though it clocks in at eight minutes long.

The production is not too bad for a demo. Unlike many others around this time, it is definitely not lacking in bass presence. Rather than being trebly and harsh, there is kind of a warm tone to the guitar. There is a bit of distortion from the drums, but not enough to distract from the rest. The vocals are mixed at an even level that allows for the dark and miserable feeling to be conveyed, without overpowering the music.

Journey Through the Cold Moors of Svarttjern is not an essential release, given that two-thirds of this is present on the band's debut E.P. Nonetheless, if you have the chance to pick this up or acquire the tracks in some manner, do so. This ranks pretty high among the band's output and is one of the more worthy releases under the Carpathian Forest name.
Posted by Noctir at 3:13 AM