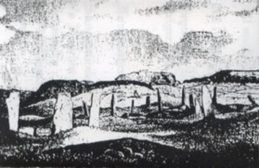 Skuggmörker was a rather unknown Black Metal project from Ingelstad, Sweden that displayed a fair amount of potential. Unfortunately, only two demos were released before it seemingly faded back into obscurity. With several of the more established bands deteriorating and many others emerging from the scene that simply did not belong, it is a shame that 1995's Härskare av den svarta natten marked the early demise for Skuggmörker.

The first thing that one may notice is the thick layer of tape hissing, which will put some off while serving only to entice others. In a strange way, it actually adds to the dark and gloomy feeling created by the music. The tone of the songwriting is rather morose, with a rather relaxed pace that is neither fast nor all that slow. It feels kind of lifeless in a way, and there are times when the pace slows down and then quickens in a random manner. This may be on purpose, or just the result of bad timing, but it works within the context of the songs. The playing is primitive and the compositions are rather simplistic, while the vocals sound like tormented howls from a distant cavern. In other words, this is just the sort of ugly and primal Black Metal that I find appealing. This demo features only five real songs, as "Nifelhel" is a morbid interlude of some sort of funeral organ and a spoken word bit, though it actually does accentuate the atmosphere of the recording as a whole. The final track, "En stig till helvete", is quite similar but also includes drums and some harsh screams mixed in. In theory, it may seem weird for a synth outro to be accompanied by drumming, but the execution is not awkward at all, possibly assisted by the poor sound quality.

Härskare av den svarta natten (Swedish for "Ruler of the Black Night") is the sort of demo that would appeal to fans of early-'90s Norwegian Black Metal, or even the output of Moonblood or the LLN bands. Sadly, as these guys vanished back into the nothingness, one can only imagine what a proper full-length from Skuggmörker may have sounded like. Definitely search for this and give it a listen.
Posted by Noctir at 1:50 PM