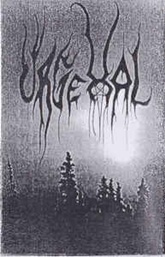 Urgehal was one of the younger bands, emerging onto the scene after the Norwegian Black Metal sound had been firmly established by such well-known antecedents as Mayhem, Darkthrone and Burzum. As with many others that began around this period, their roots went no deeper than their immediate predecessors, lacking the rich tapestry of influences that helped give birth to the aforementioned acts, as well as the likes of Emperor, Dissection or Immortal. Their first demo, Ferd, may seem rather one-dimensional but it is the best thing the band ever recorded.

Released in December 1994, this offering is highly derivative of another piece of music that first saw the light of day in this cursed year. Of course, the album in question is Darkthrone's masterpiece, Transilvanian Hunger, which was clearly a very important record for the guys in Urgehal. That this album had a significant influence upon this band is absolutely transparent. One could say that Ferd is little more than four tracks, a total of seventeen minutes, of pure Darkthrone worship. In fact, they managed to jump on this 'bandwagon' very early, even beating to the punch such bands as Judas Iscariot and Russia's Branikald.

Ferd features very minimalist compositions, owing a great deal to Transilvanian Hunger. Each of the four songs consist of a few really haunting tremolo melodies, similar and yet distinct from one another. The style is very repetitive, with little to no variation in the drumming, as well as the uniform picking technique that is utilized. The entire recording maintains a singular pace. All of these elements combine to create a rather hypnotic effect. The vocals are somewhat buried in the mix, leaving the mournful guitar riffs as the main point of focus. The atmosphere is one of impenetrable gloom and hopelessness, with some moments of "Den som jakter i natten" hearkening to Burzum's "Det som en gang var". The latter melody of "Din ofrelse" is reminiscent of Darkthrone's "Slottet i det fjerne", attempting a very similar sort of build. Like those two bands, Urgehal also chose to go with Norwegian lyrics and song titles, though it hardly matters as the vocals do not figure into things in a significant way.

Despite maintaining what most would call a fast pace throughout this demo, Urgehal display a total lack of intensity. Of course, a somewhat weak sound could result from the production as, after all, it is just a demo tape; however, Ferd has about the same sound quality as Gorgoroth's A Sorcery Written in Blood, and one would never make the mistake of claiming that as a recording that lacked intensity and conviction. The lifeless feeling may very well result from the actual songwriting, as the guitar melodies seem rather similar to those on Branikald's Varg fjerne a tornet and The Cold Earth Slept Below..., by Judas Iscariot. That said, this is not a criticism of Urgehal, but just an observation. The songwriting, playing style and production all serve to beget an overwhelmingly dreary and morose feeling. The monotony of this demo never becomes tedious or boring, something that cannot be said of the more varied songwriting of the unimpressive full-lengths that followed. While Ferd does lack the bitter cold feeling of those albums that inspired it, Urgehal's debut offering is well worth listening to.
Posted by Noctir at 11:10 PM