Pestilence - Testimony of the Ancients (1991) 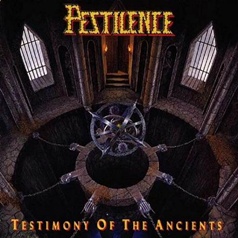 Released in September 1991, Testimony of the Ancients is the third full-length from Pestilence. In the two years that passed since Consuming Impulse, much had changed within the band. Frontman Martin van Drunen left the group and joined Asphyx, leaving Patrick Mameli to attempt to fill the void as vocalist. His performance on this album would be but one of many elements that reduced this offering to a mediocre and forgettable affair.

The inability to find a suitable person to handle the vocals was not necessarily something that the band could have helped. Perhaps, they tried and simple failed to recruit the right person. Either way, Mameli's dull voice is not the most damning issue regarding Testimony of the Ancients. The worst blunder of all was their decision to travel from the Netherlands to bloody Florida. Just like Napalm Death and Atrocity, the previous year, a European Death Metal band was so enamoured by the hype surrounding this overrated hellhole in Tampa that they crossed the ocean in order to allow their album to be butchered by the always-inept Scott Burns.

Any possible potential that Testimony of the Ancients might have had was immediately thrown into the garbage the very moment that Pestilence decided to let Burns have a hand in the recording process. The sound of this record is the epitome of generic. The guitar tone, the mixing, everything reeks of mediocrity and sounds nearly identical to other albums from this same period that Burns ruined; e.g. Devastation's Idolatry, Malevolent Creation's The Ten Commandments, Napalm Death's Harmony Corruption, Demolition Hammer's Tortured Existence, etc. The differences between the sound of each record are quite minimal, and the third Pestilence L.P. falls into this same black hole of banality. The guitars lack any rawness and the clicky double-bass is enough to drive one mad.

Beyond the extreme detrimental effect of Morrisound butchery, the album possesses other flaws. In general, the basic songwriting is all over the place. There are a few decent pure Death Metal tracks, like "The Secrecies of Horror" and "Lost Souls". But then one is assaulted with filth like "Twisted Truth" and "Prophetic Revelations" that utilize unwarranted groove riffs and really dumb things down. Then there are the more 'progressive' aspects of this wretched album, such as the addition of keyboards and the instrumental interludes between every song, which I find to be very pointless. Songs like "Testimony" and especially "Presence of the Dead" are filled with worthless wankery in the same vein as Death albums like Human and Individual Thought Patterns. Speaking of which, Mameli's voice is yet also very generic and dull, sounding quite similar to Chuck's performance on Spiritual Healing, with a bit of John Tardy mixed in. All in all, he really fails to differentiate himself in any manner, whatsoever.

Testimony of the Ancients is a complete waste of time. There are two passable tracks on this record, both of which are ruined by the production and the lackluster vocals. It's almost difficult to believe that this is the same Pestilence that released the essential Death Metal classic, Consuming Impulse, just two years earlier. This just goes to show that most bands should close up shop after one or two albums, as many just lose their true creative spark and end up releasing sub-standard trash. It also serves as another bit of evidence that Scott Burns was one of the very worst things to ever happen to Death Metal. Avoid this.
Posted by Noctir at 4:53 PM