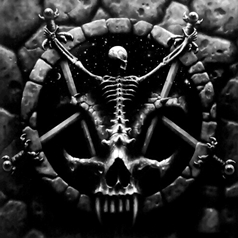 Slayer reached their creative peak early on, during the Metal Blade years. Nonetheless, they were still a viable band for a while longer, though never quite the same. The band's classic era came to a close with 1990's Seasons in the Abyss. It is safe to say that Decade of Aggression should have served as an epitaph to their career. Unfortunately, Slayer didn't break up and they lingered long enough to thoroughly tarnish their legacy. The September 1994 release of their sixth studio album, Divine Intervention, ushered in a new era of mediocrity, pandering and alienation.

Divine Intervention is far from the worst album Slayer would go on to release, but that isn't saying much. While Seasons in the Abyss had already demonstrated that they really had nothing more to offer, without merely rehashing their previous works, this L.P. adds to the list of flaws, suffering from poor songwriting and bad production, among other things. The drums and vocals are too high in the mix, which often distract from the guitars (not that there are a whole lot of noteworthy riffs to begin with). The problem with the former is most noticeable any time Bostaph is adding fills or going overboard with the double bass. As for the latter, Araya's voice are fairly awful on this album and might have benefited from being lowered a bit. It was here, on Divine Intervention, where he began to shout far too much, possibly having already lost the range he once had. Rather than saving the shouting for the more intense parts, he often does it indiscriminately. Then again, if the only alternative is the lifeless droning of songs like "Serenity in Murder", perhaps he made the right choice. In addition to this, mistake is compounded by the use of distortion on the vocals in some places, making it even worse. The album possesses a disjointed feel, overall, sounding like there were multiple recording sessions.

The songwriting, itself, is very lackluster and features way too many mid-paced riffs. For example, "Killing Fields" is four minutes in length, yet the intro section takes about ninety seconds and then the next minute or so continues to plod along, stricken with this mid-90s groove that is like poison to real Metal. Things only speed up near the very end, which is a shame as the track is over right around the time it starts to become interesting. "SS-3" is similar in that the first half is boring and pointless, though the last couple minutes of half-decent thrash riffs manage to salvage things to a degree. Songs like "Fictional Reality" and the title track are equally as frustrating, though speed itself is not always an improvement as seen by the rather mediocre "Circle of Beliefs" (as much ruined by the mundane riffs as by the distorted vocals). "Serenity in Murder" is a passable track, though it would have been much better without the slowed pace and monotonous vocal delivery during the verses. This song starts out with one of the better riffs found on Divine Intervention, but they just couldn't leave well enough alone.

As a result of so much sub-par material, the more average tracks look good by comparison. "Sex. Murder. Art", "Dittohead" and "Mind Control" each utilize a faster pace and exhibit fewer flaws, for the most part. While none of these are truly exceptional (and would have served as filler on previous albums), they are among the best that this record has to offer. Then there is "213", which appears to be the band's attempt at making another "Dead Skin Mask". The clean guitar in the intro does help to create a gloomy feeling, and the rest of the song isn't too bad despite some of the lyrics being questionable.

It is a regrettable thing to have to say about a Slayer record, that less than half of the album is even tolerable. These are the same guys that recorded such masterpieces as Show No Mercy, Haunting the Chapel and Hell Awaits. A lot of the blame has to rest on the shoulders of Kerry King. He was very open in the years following Divine Intervention regarding his desire to fit in with the more mainstream bands. As such, he made attempts to incorporate whatever was trendy at the time, when writing each subsequent album. In this endeavour, his defeat was two-fold. He failed to appeal to the larger audience that he sought, unable to properly sell out while also alienating die-hard fans in the process. The rapid decline of Slayer began with Divine Intervention, a below-average album that should be avoided.