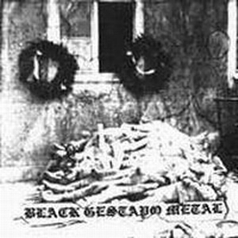 Gestapo 666 got off to a rough start, recording a brief demo and then remaining silent for several years. Noktu was quite busy with Celestia and Mortifera, while Meyhna'ch left the band (though it is likely that he was never a dedicated member to begin with). It took until June 2005 for the band's first full-length, Black Gestapo Metal, to finally see the light of day. What listeners can expect is a continuation of the style that was utilized on the first demo, but with better production. In many ways, this is reminiscent of the first Vermeth record, in that it comes off as a somewhat generic representation of the Black Legions, just with higher sound quality.

The songwriting is not terribly creative, though that is hardly what one would be looking for with this band, anyway. It is accepted that Gestapo 666 is merely keeping the LLN spirit alive, in one form or another, and this is its main charm. On its own, the material that comprises Black Gestapo Metal is not all that impressive. However, to those that remember the dark and grim times that spawned the likes of Black Imperial Blood (Travel), Feasts or March to the Black Holocaust, this L.P. serves as a posthumous tribute to those that went before. Personally, I often wished to hear such recordings with a slightly better sound, just for the fact that so many brilliant riffs were hiding amidst all the chaos. Still, that was also part of the character of those bands and the music that they created. Gestapo 666 removes the hissing, feedback and excessive distortion to give listeners a clearer impression of the French Black Metal sound.

The arrangements vary, from track to track, but the LLN riffing is easily heard. Some songs possess more aggression, though an overwhelming gloom hangs over the majority of the material. This is most evident on the track “Opening the Crypt of Death”, which is one of the highlights of the album. It is certainly in the minority, being one of the only tracks to feature such a slow pace, but the dark atmosphere that it creates is very memorable. This is mainly due to th prominence of the guitar riffs. Black Gestapo Metal is a release that is very much driven by the guitars. Drumming exists only to keep time, really, and even the vocals are buried under layers of damp soil. Of course, therein lies one of the negative aspects of the album. The mighty Meyhna'ch was replaced by Satanic Tyrant Werwolf, of Horna / Satanic Warmaster fame. It is not that he does a bad job so much as he fails to put forth a great deal of effort, throughout the entire recording. He does just enough to get by, without going the extra mile. It is good that he did not employ his usual style, yet he did not do enough to match the maniacal sort of vocals that one would expect from this music and it really holds things back, quite a bit. The album also suffers from the fact that several of the riffs sound like they were recycled from the aforementioned bands. There is a strong lack of originality that plagues this album, resulting in a lack of any unique character.

It is odd to think that this release is considered as having high quality production, compared to bands like Black Murder, Torgeist and Vlad Tepes, yet it would still be thought of as rather lo-fi when compared to most contemporary records. Black Gestapo Metal actually rests at a very enviable position, being just clear enough for everything to be heard fairly well and to allow for the music to make the most impact, yet still raw and gritty enough to belong to the underground. As previously mentioned, the guitar is the dominant aspect of this album, and rightfully so. The drums and vocals are buried in the mix, to an extent. In the case of the vocals, it seems to be a little too much, though it may help conceal the mediocre performance.

Gestapo 666 is not an essential band but rather one that is primarily of interest to those into the old French scene. Their first L.P. fails to measure up to most of those old demos and albums, but the spirit is there and it is still a solid dose of Black Metal, if not a bit average. While there are some things that could be improved upon, it is worth hearing. Chances are, though it is not likely to blow you away, it will grow on you with repeated listens.
Posted by Noctir at 1:33 AM