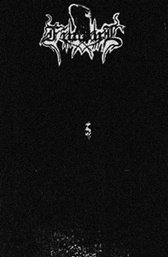 Fimbul was a short-lived Black Metal project from Norway. The sole band member, Ramn, released the first demo, Vinterland, in February 1995. Recorded on a four-track, this lo-fi tape bears similarities to other demos of this period, such as Thule's Der vinterstormene raste and Urgehal's Ferd.

Vinterland is rather brief, clocking in at under fifteen minutes. Aside from the intro and outro, there are only two real songs on here, of which "I de norske skoger" is the real highlight. The songwriting is rather straightforward and primitive. The tremolo melodies are memorable and somewhat haunting, reminiscent of something from Transilvanian Hunger. The vocals possess a grim feeling and the drums are pretty basic. "Nattevandring" has a little more variation in the pacing, though the riffs aren't as interesting. However, around the halfway mark things slow down as a mournful melody emerges for a few moments. It is unfortunate that this soon transitions to another less-engaging riff. The outro, "Stillhet (...Norge)", reminds one of "Snø Og Granskog", from Panzerfaust.

All in all, Vinterland is a decent little demo, but nothing special. Out of the four tracks, only "I de norske skoger" manages to stand out. That said, it is worth a listen for fans of the mid-90s Norwegian Black Metal sound.
Posted by Noctir at 10:06 PM