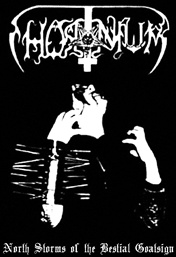 My introduction to Thornium came in the form of a Maxell cassette sent to me by a penpal from Latvia, many years ago. Side A featured Nifelheim from Throne of Ahaz, while on Side B was Thornium's debut album, Dominions of the Eclipse. I remember the latter was so long that it didn't even fit in its entirety, and certainly failed to impress in the same manner as Throne of Ahaz. It was only some years later that my opinion of the band became more favourable, upon hearing the 1994 demo North Storms of the Bestial Goatsign.

Musically, this is pure northern darkness. The guitar riffs are cold and dismal, just dripping with the typical mid-90s Black Metal feeling. "In the Depths of Northern Darkness" is equal parts fast tremolo melodies and mid-paced gloom that allows the music to breathe a bit. The title track picks up from where the first one left off, before speeding up and utlizing a riff reminscent of classic Mayhem. All throughout, Typheus' hateful vocals add to the overall atmosphere. His voice is mostly dry and raspy, with bits of near-hysterical shrieking, and really calls to mind Abbath's performance on Diabolical Fullmoon Mysticism. The subtle vocal changes help to give life to the songs, as do the variations in tempo. It's all very straightforward and primitive, yet still possessing ambition and feeling. The droning riffs that emerge in the later part of "North Storms of the Bestial Goatsign" are haunting and memorable, with melodies of a similar style to be found on "Min Vandring Till Mörkrets Furste".

The production is fairly good for a Black Metal demo from this period. Everything is mixed rather well, with the guitars up front as they should be. The drumming is still audible, just not dominating the sound as often happens. The vocals are high enough to be clearly deciphered, without drowning out the rest. It does seem as if there was some clean guitar being used at the beginning of the tape, but it didn't come through very clearly, which was probably for the best.

Thornium's first offering is nothing original, just traditional Black Metal in the northern style that was really coming into its own around this time. The only real complaint here is that it's pretty short. Though, sometimes, it is better to get in and get out and not waste time on useless filler or mediocre tracks that bog things down. All three songs are of the same good quality, making North Storms of the Bestial Goatsign very much worth tracking down and listening to.
Posted by Noctir at 11:30 PM